I am a big fan of old S V Sekhar comedy dramas. Such a huge fan that I use many of his drama dialogues in everyday conversation. Comedy relief is especially the need of the hour!! Listen to his "Aayiram udai vaangiya aboorva sigamani" to find that the current political situation in TN is not all that different!

Listening to SVS drama cassettes on tape recorder was an entertaining passtime in the early 90s. It all started off with "Ellarum Vaanga". Logic less mindless laugh riot! "Periya Thambi", "Kadhule Poo", "Oru sondha veedu vaadagai veedagirathu", "Mahabharathil Mangatha" are my favourites. I think I can confidently say I've listened to all of his dramas now. I'm not sure of the chronological order but dramas with SVS & Sunda combination are the most enjoyable.

Now with youtube genie, I've also found video of some of his dramas. Looks like these are recently recorded ones. While trying to match those familiar voices with faces, I couldn't find the lead female character of the old dramas. The lady who lent her beautiful & awesome voice to characters Narasamma alias Seetha in "Ellarum Vaanga", Viji in "Kaatule Mazhai", Champa Devi in "Mahabharathathil Mangatha" was nowhere to be found!

After exhausting all full length dramas, I started on his TV serials. While listening to one of the episode called "Priyamulla Philomina" in "Nam Kudumban", I heard that lady voice again as "Philomina"! After finding the video of the episode, kanden Seethaiyai!!! I felt so overjoyed as if I found a long lost friend! 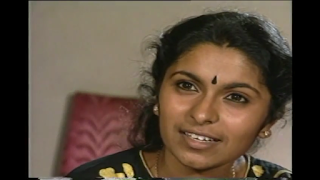 Any one knows the name of this actress??
Posted by Me too at 4:31 PM

Labels: Misc, ReCollections, This n that

I listen to his dramas few times every year but never saw it on youtube. Will see..

Glad you "broke the break" before it touched one year.

SVS dramas somehow did not have the same flow as Crazy's. Will check them out. Atleast the 5 yr old will have some catch phrases to use.

me too,
Came here to say that the serial Indradhanush(Apr 89 - Sundays) is there on Youtube and there are some clips of the serial Neev(Anurag - boarding school gang) :-)

Very recently, in one of the whatsapp groups, someone brought up this topic about old Hindi DD shows and lo! ttm found video links!! :)
I had no clue, KJo was in the cast of Indradhanush!

ttm, I'm getting sucked into the suggested videos quicksand also!!

Any possibility of update, MeToo? :)