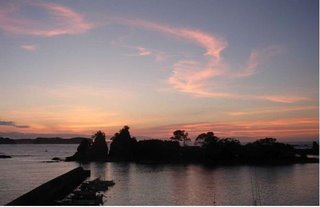 My father's favourite chant during the weekends! My father and their generation are incapable of lying down in the bed after 5-5.30 AM (and cannot tolerate people who can, I used to fume!). Any of you remember the drama, 'Aiyo, Amma, Ammamma'? We often used to advice Appa, 'Kathadi Ramamurthy' style, 'muzhippu varum, aana ezhundhirukka koodadhu. Thalai thalaganiye kaalukkum, kaal thalaganiye thalaikkum maathi thirumbi thongidanam'!!

I do love the ealy morning time, if and when I'm forced to wake up! The chirping of the birds, the clean and fresh air, the slight chilliness (even in hot Chennai).... The morning commute in crowd less buses used to be an added advantage. My mother tells me I was an early riser as a baby. I faintly remember how as a kid, I couldn't keep my eyes open after 8-8.30 PM(there used to be a muppet show called 'Arabian nights' at around 8.30PM in the early 80s which I remember trying to watch straining my droopy eyes!). I don't know, when I drifted away from that good habit! Should be after 'desiya nigazhchigal' started making sense!

In this country, most of my friends and relatives' life styles were kind-of shocking to me in the beginning. Even school/college going kids, work or party till late night/early morning and don't get up till noon or even 2 PM!! For the fear of getting cursed for waking them, I have given up calling them all together! It is recently that I met a family here who all are early risers and the inspiration behind this post(One of my husband's ex-colleague back in MA used to be at work before 6 AM everyday but he suffered from Insomnia!). That when they boasted that they are always on-time, rather first arrivers, everywhere unlike the others('kuttramulla nenjam'!) it really hit me!

I thought, 'better late than never', let me try & follow Appa's advice atleast now and set a good example to my daughter! Instead of being a night owl, let me prowl, I mean, browse in the wee hours, enjoying the same quiet time. But old habits die hard! However early I went to bed, sleep came knocking only at midnight and as a result eyes were refusing to open at dawn! But on Saturday, weary after an outing in the warm weather, sleep did seem to hug me early and I got up all refreshed early on Sunday morning, only to find 'day light savings time kicking in' and the clocks had all sprung ahead!! Ada Che!!
Posted by Me too at 10:00 PM

ivalavu try panni daylight savings vanthu keduthuducha? :-)... the best way to push your sleeping cycle back to the "early to bed early to rise" is: instead of trying to sleep very early try sleeping half our earlier than ur normal sleeping time... do that for a week, then push another half hour and so on till u become a early riser...

in bglr weekdays ellam, am early to rise (not for health reasons but others like empty buses, less traffic, no-one at work so peaceful working, back home early so more time in the evenings, etc)...but sunday mattum (when in chennai), i sleep my way to glory :-)...

Me too, guess what, offlate I've also been trying to be an early riser. It is really good to be that way cos its good 4 health & u r more energetic & also seems like the days r long. But must admit that it is not so easy 2 b an early riser...esp after a late nite.

I dont believe in waking up late nights (except that im forced to do so for the past few days.. )

What are you doing ? Sleeping for the first 10 hours of the day.. boy.. thats sluggish !

happened to me too... Daylight savings kinda screwed up my sunday!! n the effect lingers on until today!!

me too,
To make a significant alteration in lifestyle, one has to be sufficiently brainwashed into its benefits :) The more we learn the ins and outs of something, the stronger our decision will be.
Download this 60-odd pg booklet on Sleep by the Dr.Postawski the sleep guru, has pretty good info on body clock, body temperature and sleep conditioning. [Click the FREE button on the page]

The early bird gets the worm, the late one the Big Mac.

i don really stay awake late.but the fact is i get up late as well..
but even i used to wonder when i see my cousins in school say 8 th or 9th standard burn the midnight oil which i never did.

has to be me, exactly! Starting trouble!!

Kuttichuvaru, though I like the 'Fall back' in Oct/Nov!

Hmm....early to bed and early to rise does make a productive day and also gives one enough time to get several stuff done. Unfortunately, after coming to US and with the weekend concept, sleeping late has become a newly acquired habit, with the cold,rainy mornings contributing to it.

it works either way since its pretty quiet late at night after the others go to bed. i've always been a night owl and can rarely go to bed b4 midnight :)

mp3 of Ayya Amma Ammamma was available for download in Coolgoose in 2003, it might still exist ;-) [I overheard the dialogues when it was played in DD during schooldays..was it the one where some IAS-preparing guy reads Indian Economy as Indiana Kaanamey?] The opening words 'Andavane...ellaam nalla padiya mudiyanum...Raghupathy??' keeps ringing in my ears after all these years since I tried to listen to it in office some 15 times but was interrupted midway by my manager/ph calls and I managed to finish it in the 15th attempt(after restarting every time)!
[Anyway in school, everytime we got bored, the backbenchers used to shout 'Indian Economy' in chorus, esp in Physics class...]

Mitr, too bad that you've acquired this habit!!

Why is that considered a "good" habit? It's just a matter of choice.

ss, things I find hard to learn/make habit are automatically termed "good habit" in my dictionary!!

I vaguely remember arabian nights.
I have always been early to bed, and nowadays early to rise. I prefer getting up around 5 and having a quite cuppa before chaos strikes :-) And I love working out when the sun rises. Something in that.
But then, in the south, early mornings are quite the norm!

ttm, aiyoo, puriya maatengudhey! One time this old lady was enthusiastically telling me about this place and I kept a smiley face nodding the whole time!